​INSPIRATION
Spirals represent the universe's evolution from its singularity, the cosmic egg, the rhythm of life, the never-ending journey into the unknown, the vital creative force of existence echoed in the shape of our DNA and Galaxy: the idea of 'me and my universe' seen in our interaction with the world extending beyond our bodies and minds. Spirals are also seen in many world traditions and symbolise the womb, fertility, lifecycles growth and change.
The inspiration for the paintings, the spiralling Nautilus, the oldest living fossil that has remained unchanged for millions of years, best symbolises this idea. Spirals arise from a property of growth called self-similarity or scaling, seen in the growth pattern of the chambered Nautilus' shell, where it builds new and larger chambers of the same proportions as it outgrows each section. Fundamental to nature's cyclical forces and seasonal changes, spirals represent continuity and progression: monthly lunar and yearly solar patterns. A variety of natural phenomena also reflect spiral forms: the trajectories of stars and planets, tornados, the growth patterns of flowers and seeds, the unfurling of leaves to the logarithmic shape of our galaxy. For example, the Fibonacci sequence determines flower petals and seeds' numbers and spiralling patterns. The golden ratio based on the Fibonacci sequence, spirals and self-similar curves have long been associated with proportions pleasing to the eye echoed time and again in nature.
​SPIRALS Mathematical
​SYMBOLS: Nature, City plans, Cultural
INTERPRETATION - SHAPE MOVEMENT COLOURS
​The paintings use a single continuous line to divide the canvas into two positive and negative spaces. The positive spiral form uses rotational geometry to reflect an identical void shape, the interpretation of the Nautilus as a slice of time eternally growing outward and inward to infinity. This idea is an interpretation of galaxies spiralling towards a central Blackhole, a point of non-existence where even time comes to a standstill, and a White hole of existence reversing this process.
The arrows represent interconnectedness, the curving interaction of space and time within this double helix. Tracing the shape's outlines reveals four spirals - one set in the positive form of spiralling arrows radiate outwards, and the other inwards. Similarly, in the void, one set of spiralling arrows radiate outwards and one inwards.

​
​COLOURS:
​The painting colours are an interaction of light and dark to create an infinite range of mid-tones inspired by the blackness of space and Neutral Earth colours, shades from White to Grey to Black and Cream to Brown to Dark Brown.
There are a total of 6 paintings in this series created in pairs that are complementary to each other: 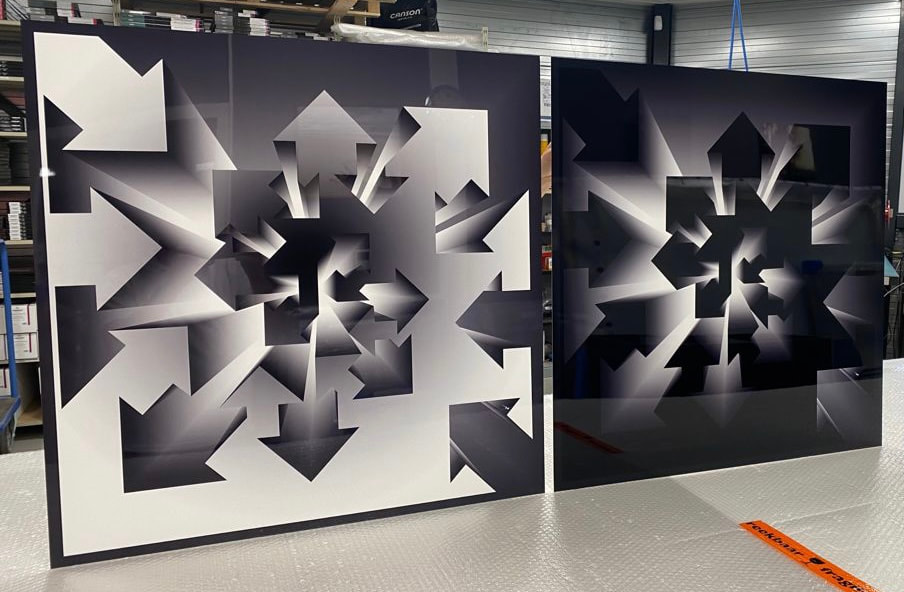