TO THE MOON- AN ART AND SCIENCE COLLABORATION ​​
Artist Lakshmi Mohanbabu is the first and only Singaporean to be selected by the Moon Gallery, the first extra-terrestrial art gallery which aims to travel to the Moon no later than 2025. Her Interaction cube will become a part of this permanent gallery on the Moon comprising 100 micro, highly concentrated ideas from around the world integrated into a 10 by 10 grid tray that will convey universal values and serve as seeds of a future interplanetary culture. As humanity expands into the solar system art will become the language of inclusivity and diversity.
The creation of the Interactions cube was a collaboration between Lakshmi Mohanbabu and scientists at NTU, Prof. New Tze How Daniel from the School of Mechanical & Aerospace Engineering and his team Rahul Koneru and Joel Lim. NAMIC@NTU played a critical role in providing technical assistance and guidance in creating a suitable prototype.
​Supported by NTU (Nanyang Technological University) and NAMIC (The National Additive Manufacturing Innovation Cluster).
​
ON THE INTERNATIONAL SPACE STATION (ISS) 21 February 2022
THOUGHTS-VISIOn
Infinity, interdependence and interaction are concepts that feature in all Lakshmi's work. The Interaction cube, based on her 'Interactions' series of paintings, symbolises an integrated world-view, transcending all religions, cultures and continents in the context of the world we live in today, where travel, discovery, interaction, communication and knowledge have reached new heights. To understand our surroundings and the Universe, we have created numerous building blocks and analysis methods to represent our perceptions, thoughts and interpretation: language, numbers and basic shapes as vehicles to explore art, science, religion and life.
The cube embodies our relationship to the infinite, unity, harmony and cosmic order based on a pattern of existence, the microcosm and macrocosm, the world within us that extends beyond our bodies and minds, based on a Mandala, a space penetrated by a sacred core, symbolising the Universe seen in the forms of Atoms, our Galaxy, the Universe, the Earth, the Sun, the Moon, the cycles of life, and our circles of interactions with friends, family and communities. Cross-cultural patterns of this idea are seen across religious beliefs and the globe from the wheel to the ground plan of cities, such as Hindu temples, Buddhist Stupas, Muslim mosques, Christian cathedrals, and Native American teepees. ​
INTERPRETATIOn
In a world striving towards infinite possibilities while going through the cycle of life, aiming for the moon is a step forward in human endeavours. The Interaction cube includes concepts of numbers, time, space, life cycles, infinity and creation, a unifying symbol of racial harmony and interaction that embodies our being interconnected, interrelated and interdependent. It is based on the ideas of:
The singularity of the self
The duality of complementary sides
The trinity of creation, preservation and destruction
The plurality in our beliefs to
The infinity of thought and creation

These ideas have been interpreted in the cube as:
-Singularity/ Unity: represented by the central/ axis crosshairs, the point of origin and creation.
-Duality: represented by the square divided into two sections, the positive and the negative.
-Trinity: represented by the triangle, the smallest polygon, represents the three phases of the moon 'waxing', 'waning' and 'full' depicted by triangular headed arrows that imply direction and movement.
-Quaternity: represented by the square, the basic foundation for the cube. The four directions. The cube made of two interconnected spaces, the positive crest and the negative trough, is an interpretation of the complementary interdependence of the yin-yang.
-Plurality: represented by the circular pattern of radiating arrows, with 12 arrows penetrating and moving inward, the self, and 12 arrows radiating outward reflecting the form of petals in a flower blossom, the creation. The circle, a polygon with infinite sides, symbolises the sun, the moon and the earth.
-infinity: seen in the line starting and ending at the same point to depicts continuing life cycles.
-Creation:
Arrows: masculine, solar symbols, depicting the sun's rays and direction, the movement of time. A flight of arrows signifies ascent to the celestial.
The cube the arrows radiating in-and-out depict the interaction of the inner self with that beyond the reaches of our consciousness, the creative process.
Flowers: The flower, a feminine principle, symbolises the creation of the Universe. The Lotus or the Rose represent creation, new life and beginnings.
The cube has 12 Arrows radiating outwards like the petals in a flower, alluding to the blossoming of a flower and the creation idea.

The Orange cube represents fire and energy, signifying progress.
The cube divided by a single continuous line starting and ending at the same point represents the idea of continuing life cycles and infinity.
The wave, the medium of travel for light, sound and energy, is needed for all forms of interaction and communication and embodies the interdependence of opposites. The waveform, the existence and complementary nature of the crest and trough as seen in the Yin and Yang, is interpreted in the cube as the existent positive space and the non-existent negative space, where the positive space defines the bounds of the negative space. 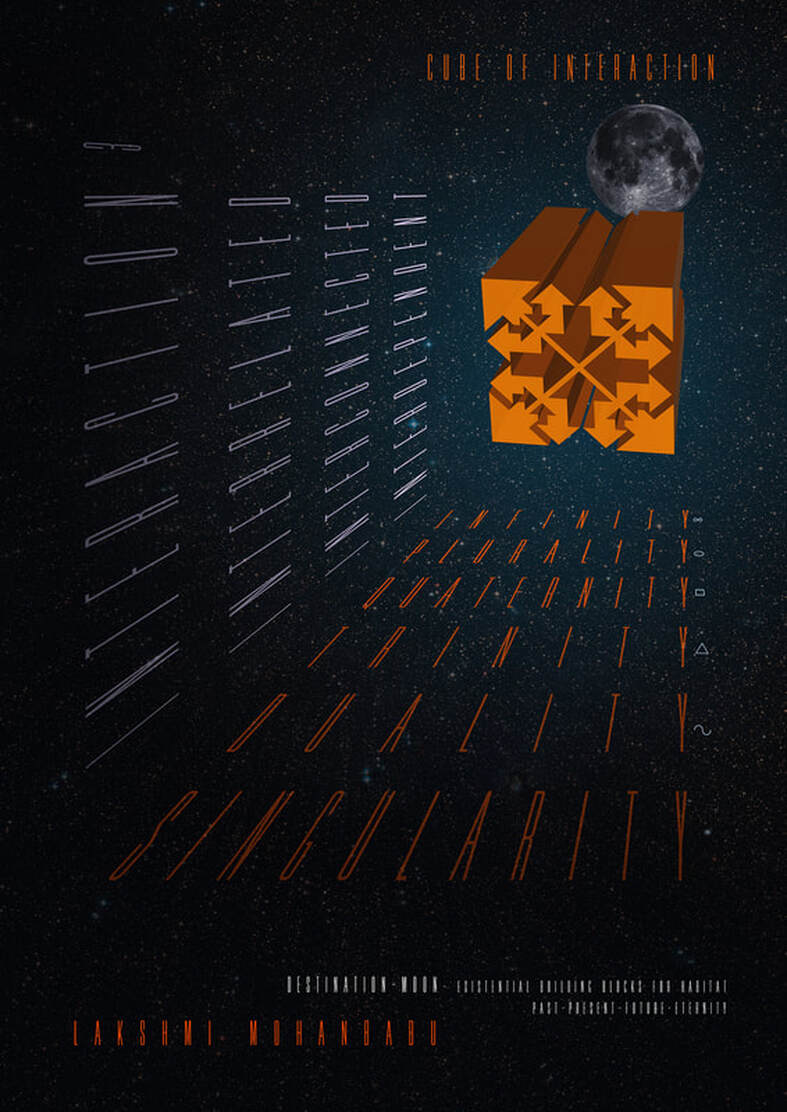 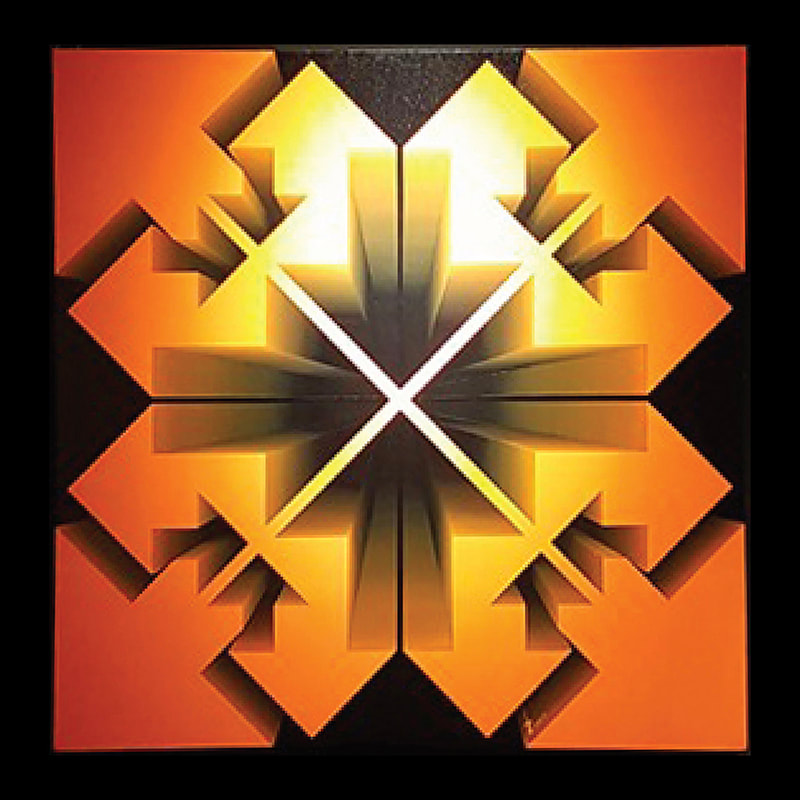 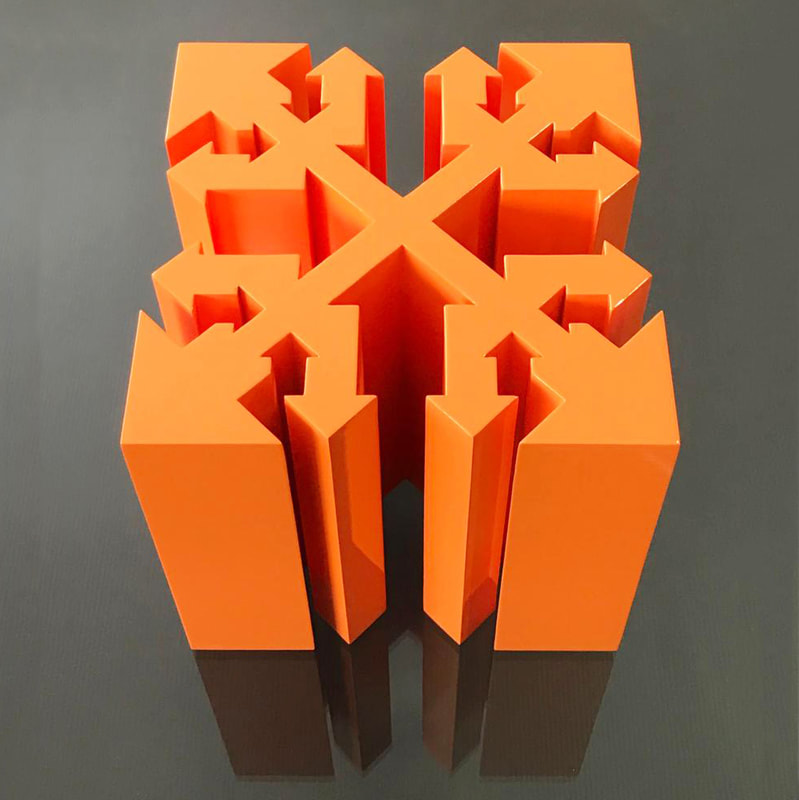 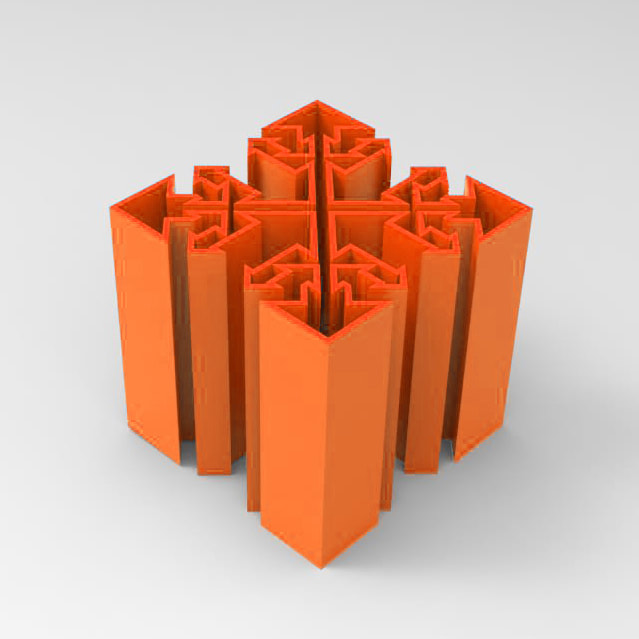